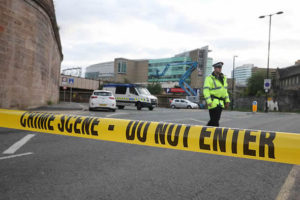 Manchester Bombing Attack that Killed 22 and injured 59 people at a music concert.

Twenty two people have been reported dead and 59 others injured in the Manchester Arena explosion, which happened on the night of 22nd May 2017. The youngsters had attended the Ariana Grande’s gig and according to the BBC News report, the moment of blast was captured on a mobile footage. Elle Cheetha, who was among thousands of other youths in the concert was recording the event when the explosion happened. So far, the cause of the attack, which happened outside the venue is still unknown but according to Theresa May, the Prime Minister, the police were treating the explosion as ‘a daunting terrorist attack.’ However, Ian Hopkins, the GMP chief said he would treat the blast as a terror until further information is availed.

The attack would be the worst in the UK in the last decade since the London bombing of July 2005 where 56 people were killed. According to the fast-paced investigations by the police, the attack is said to have been carried out by a lone suicide bomber. Nevertheless, detectives are working to establish if the bomber was part of a network or was working alone. Reports have also confirmed that the said attacker died at the arena. Mr Hopkins further said that so far the investigations reveal that the attacker was carrying an improvised explosive device which he fulminated, leading to the atrocity. There is no official claim of the attack but the Isil supporters celebrated the bombing on social media terming it as victory against ‘the crusaders’ of the West. Other Isil supporters said that the attack was in retaliation of the involvement of UK in the bombing campaign against Isil in Syria and Iraq. In one of the videos, one masked man said, “This is only the beginning. The Lions of Islamic State of Iraq and Sham are beginning to attack all the crusaders.”

Witnesses described hearing a loud bang at the entrance of the arena not long after 10.30 pm as thousands of the people who were at the gig struggled their way out. Some said that they saw smoke and smelling burning in the foyer area of the arena while others saw nails on the floor.  The aftermath was bodies and blood everywhere. More than 400 police reported to the arena at 10.33pm, shortly after Grande, the US singer had finished her performance followed by emergency responders including 60 ambulances streaming the area. This is a horrific and shocking attack targeting young adults who were simply having a good time. It is extremely traumatizing particularly to the parents of the children who were killed, the victims and the families who have lost their loved ones.  Grande, who escaped unhurt, said she is broken by the attack.

In the wake of the apparent terror attack, Jeremy Corbyn and Theresa May have suspended their election campaigns and May is chairing an emergency Cobra meeting on Tuesday 23rd, at 9am. The Prime Minster confirmed that all campaigning ahead of the 8th June elections was being postponed.